Shooting breaking news is definitely one of the more interesting parts of my job. When the dispatcher gets on the radio and says that they have a working structure fire with possible entrapment, my heart rate jumps instantly and the race is on to get to the scene in time with hopes of getting "the shot." Most of the time we show up to the scene and the fire is already extinguished because it was small like a kitchen fire or it was a trailer. When a trailer catches fire, well... they normally don't last long. Last Sunday, the call came in and I began to make my way to the approximate location that I was given. As soon as I crossed the bridge into Ohio, I saw the plume of smoke and I knew it was a big one. 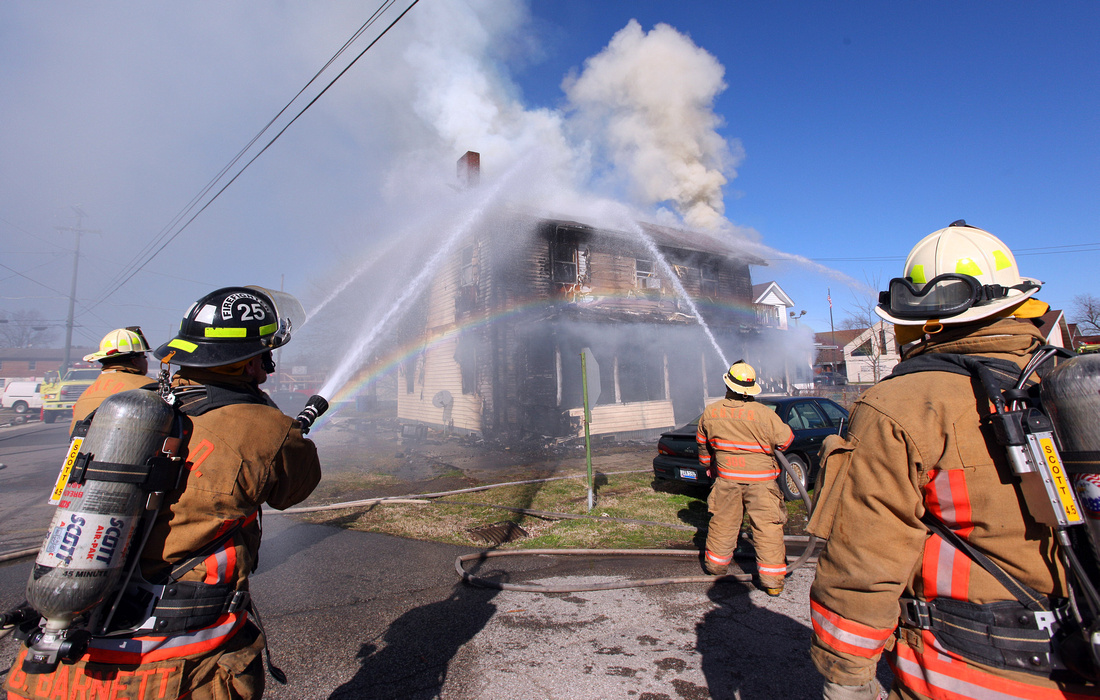 It was a gorgeous day out with lots of sunshine and hardly a could in the sky so without any worries of shooting in low-light, which I often do, I grabbed the lens and body combinations which are best suited for the job, the Canon 16-35mm f/2.8L II on the 5D MK II for ultra-wide angles and the Canon 70-200 f/2.8L IS II on the 1D MK IV for the range and fast speed. To be honest, these aren’t my favorite lenses but they are durable, weather proof, and provide a good zoom range. Shooting with two bodies allows me to quickly switch from telephoto to wide angle without risking water damage or ash getting to the sensor; it also makes you look more professional. I prefer the image quality I get from the Canon 24mm f/1.4L II and the Canon 200mm f/2.0L IS, however, I lose flexibility being tied to those focal lengths. As far as the camera bodies go, the 5D MK II provides a far superior file due to a greater dynamic range and better color. The 1D MK IV has the superior autofocus system, shutter speed, build quality, and JPEG images are much better above ISO 4000.

When I arrive at a scene I usually look around to get a feel for the overall emotional level of the emergency crews. If tensions are high then it is best to keep my distance and shoot mainly with a telephoto lens from the other side of the street. On this day, the firefighters were at ease and there weren’t any police around to keep people like me out of the way. Perhaps it was because there were several fire stations that were able to make it to the scene and they knew no one was in the home. I try my best to stay out of the way, only moving in close to the firefighters who were stationary while spraying the house from a distance. Whenever possible, I grab the names of the firefighters to complete my captions. But you have to constantly be aware of your surroundings in order to avoid getting hurt or hurting someone else. 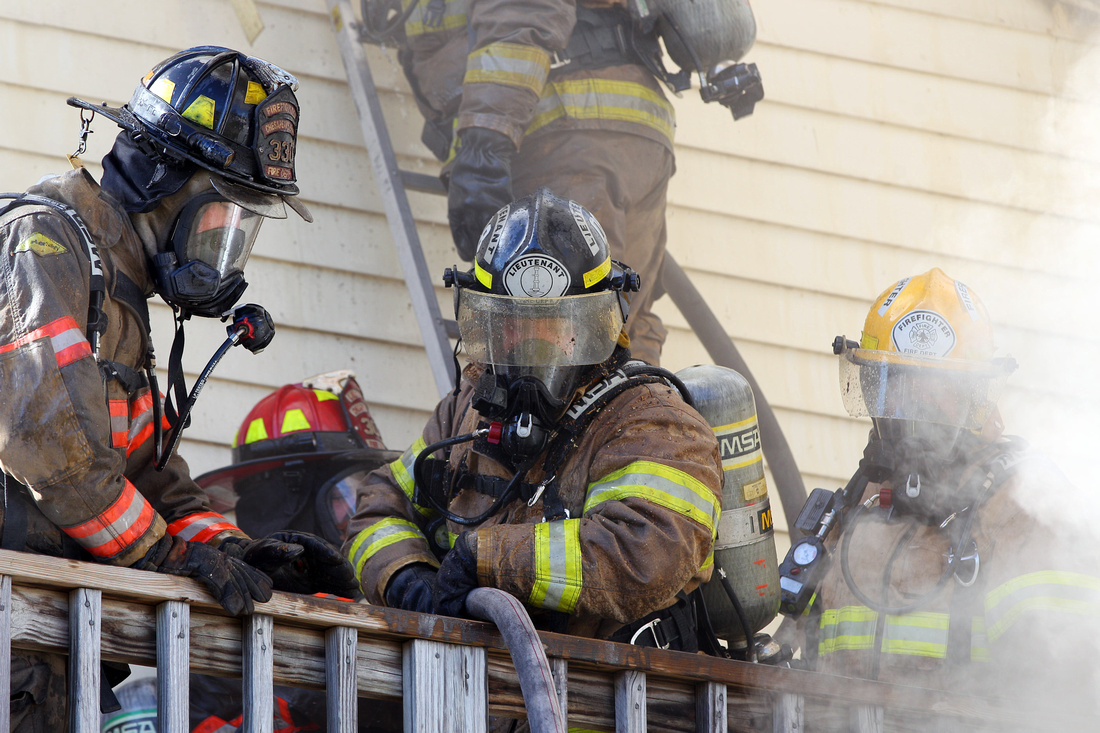 Working my way around the scene I was able to get a good variety of photos but since I was working without a respirator I had to make sure to keep an eye on the direction of the wind. There is no telling what is burning in that house so even if you are in a great position and getting awesome shots, once that wind begins to blow the smoke your way you had best move upwind. I often have my 5D MK II with the wide-angle lens set to single shot since I don’t plan to capture any rapid movement and the 1D MK IV set for AI Servo with a shutter speed high enough to freeze most movement (normally 1/1000 sec or better). Most of the time I shoot in manual but on a nice sunny day with no clouds I switch the camera to Aperture priority (Av mode). Auto white balance usually works of for these sunny days but when shooting in the shadows I usually switch to cloudy for the extra warmth. This will get my shots pretty close to an accurate exposure and if I want it perfect I adjust my exposure compensation depending on the scene.

Focusing through smoke is often a difficult task with most cameras since the contrast level is often very low. Even the Canon 1D MK IV will struggle with these scenarios so you must try to wait for a clearing. You might have more luck switching the camera to Single Shot and refocus with every shot with hopes of getting one in focus. It will help to avoid shooting wide open and stop your camera down to f/4.0-f/8.0 if possible. 90% of the time I use the 1D MK IV on AI Servo and 75% of the time I use the 5D MK II on Single Shot AF. What if this is at night though? Things get much more complicated and your camera’s high ISO capabilities really start to matter.

After shooting the house fire and seeing the roof collapse I felt as if the action had peaked and it was time to head off to shoot some of my other assignments for the day. A few hours later, I got another call. I hadn’t even finished editing the photos from the first fire. I arrived at the scene which was just about a mile from The Herald-Dispatch and I was one of the first people on scene. Now the time was dusk and the light began to fade. It appeared to be a small fire and I didn’t think I would be there long, so after having such great luck with my setup from the first fire, I grabbed the same gear and headed off to evaluate the scene to find my shooting angle. 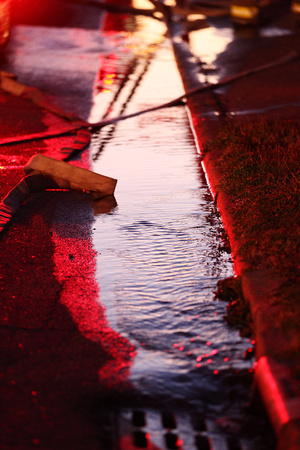 It started out at a small fire and tensions were relatively calm since the building was thought to be abandoned. I snuck in and got a few close shots in front of the fire trucks and then all of the sudden things began to escalate. The fire was spreading and they called in more trucks including one with a ladder. At first I was shooting at ISO 2500 which is fine for both the 5D MK II and especially the 1D MK IV, but at the sun quickly dipped behind the horizon I had to boost my ISO up to 8000 on the 1D with the 70-200mm f/2.8L IS II lens. Ambient light was terribly low; the only real street light was on the opposite side of the building. I recall a firefighter climbing a ladder to bust out some windows, there was a fire burning on the roof above him with flaming debris, most likely rubber or tar, dripping down to the ground so I timed the shot so that the fire was behind my subject to separate him from the wall. I was ready to run to my car to grab some faster prime lenses but then they started to raise the ladder on one of the trucks and I definitely didn’t want to miss that shot. The contrast level was quite low for my camera’s AF sensor and AI servo would have surely missed every frame due to the darkness and smoke so I made sure to shoot on Single Shot AF and refocused with every frame hoping to get my subject in focus. 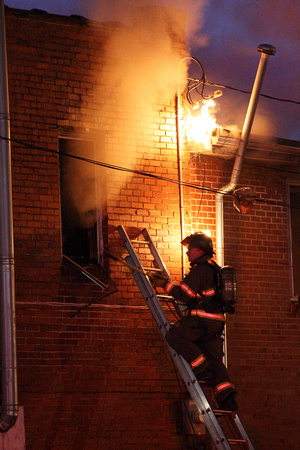 My favorite frame came near the end as the firefighter was still climbing the ladder on the truck and the climax of action had most likely ended. There was still a bit of fire coming from the roof which illuminated some of the smoke. I love low angles so I set my 5D MK II on a fire hose and snapped away a few frames. The hose helped to stabilize the photo since I prefer not to shoot with my ISO higher than 3200 on that camera and at 1/40 sec. I was able to get the exposure close enough to perfect. A slow shutter speed also helped me get more lights from the firetruck in the frame since they are constantly blinking and flashing. I shot several frames in a sequence and they all looked different, the image below was chosen since I could see the light coming from the firetruck behind the structure.

Thanks for reading my first blog post, for my next one I plan on talking about the upcoming camera models, the Canon 1DX and the Canon 5D MK III. Until then you can check out more photos from the fires at the two links below: